National Volunteer Week is an annual celebration observed in the United States and in Canada in mid to late April, to promote and show appreciation for volunteerism in the two countries. In the United States it is organized by the Points of Light foundation. “Service Unites”, the theme for National Volunteer Week, captures the power of changemakers to come together to build stronger, more vibrant communities through service. Between April 14th and 20th, The Junior League of Syracuse celebrated National Volunteer week with a variety of community impacting experiences. 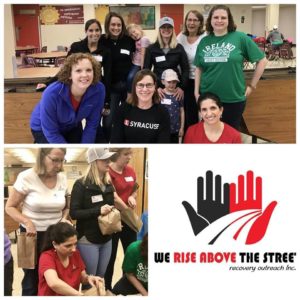 Junior League members participated in We Rise Above the Streets, Inc.‘s “Sandwich Saturday.” We Rise Above the Streets, Inc., is an organization in Syracuse led by Al-amin Muhammad. The organization’s mission is to end homelessness in Syracuse and on a smaller scale address the hunger in our community every Saturday. Sandwich Saturday consists of members from the community getting together at Lincoln Middle School and preparing sack lunches for the homeless and working poor in our community. Prior to the event, JLS members brought donations to the April GMM consisting of snack foods and hygiene products. After approximately an hour spent making sack lunches, the lunches were transported via volunteers to under the bridge near the Rescue Mission. Over 50 people were in line waiting for food, donated clothing, and hygiene materials. JLS members went down to help in handing out the food. Men, women, and children were the recipients of the food and other items. The event ended after all the food was handed out, approximately 1 hour. Sandwich Saturday happens every Saturday, and the Al-amin is always looking for donations!

Members participated in a volunteer activity of their choice to support National Volunteer Week. Some members chose to bake cookies for the Samaritan Center for this event. There were approximately 20 dozen cookies delivered, in addition to many streets cleaned up and clothes donated.

Members shelved and boxed up textbooks at Blodgett High school. This enables staff to readily find their books, in turn helping students learn more in the class room. The hope is to return and build an ongoing solution to organize Blodgett’s textbooks.

Members participated in a STEM event at the Danforth Middle School. This event reaches over 50 middle school aged girls every year. Not only are the girls affected but the presenters and staff that are involved find it incredibly inspiring.

The JLS 2017-2018 new member class wrapped up National Volunteer Week by packing boxes for distribution at the Food Bank of Central New York.

The Junior League of Syracuse has been promoting voluntarism, developing the potential of women, and improving  Central New York for 100 years and counting. View a glimpse of our history and impact within the greater Syracuse community here.